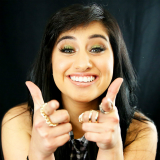 Detroit After all the votes were counted, Jena Irene Asciutto, the 17-year-old singer with ties to Waste Management, was voted runner up on American Idol. During the show’s season finale on May 21, Caleb Johnson was named the winner of season 13. For the second year in a row, WM was closely connected with an American Idol finalist. Last year, Candace Glover, daughter of WM Driver Ricky Glover from Hilton Head, N.C., was the season 12 winner.

Despite losing out on a record deal the show promises to winners, Asciutto, known professionally as Jena Irene, walked away with a Ford Mustang. She also will join the top 10 contestants on a 41-concert tour this summer. Ascuitto has four relatives in Michigan who have a combined 150 years of experience at Waste Management.