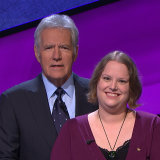 Elkridge, Md. – On September 23, Waste Management’s Stephanie Stevens, an operations
specialist at the Kit Kat recycling facility in Maryland, appeared on Jeopardy, having been selected
among more than 100,000 people who submitted tests to appear on the show.

Most would agree that participants on Jeopardy are an intelligent bunch. While more than 25 million
viewers tune in each week to try their hand at providing the correct question for every answer, few actually
get the opportunity to appear in person.

How did Stevens do? She held her own for most of the episode, amassing $5,700 after Double Jeopardy.
When Final Jeopardy came, Host Alex Trebek announced the category: Classic Films.

Stevens’ answer was a good guess — What is West Side Story? — however it turned out to be incorrect.
The second place contestant also guessed West Side Story. Only the day’s champion got it right:
Breakfast at Tiffany’s.

“I can say it was a lot of fun,” Stevens said about appearing on the show.

Congrats, Stephanie, on the third place finish and the $1,000 prize.