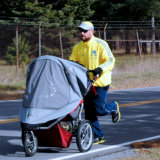 Smyrna, Ga. – When Army Veteran Joe Sullivan set out to raise $1,000 for the American Heart Association
(AHA), he didn’t know he would be partnering with Waste Management to exceed that goal.

Sullivan, a lifelong runner, suffered a heart attack shortly after returning from Operation Iraqi Freedom in 2004.
Not to be discouraged, he continued to stay on the track and by 2009 had completed a marathon. Since then,
he’s dedicated himself to a new cause called the Recycling Runner Project, in which he collects recyclable
items from the road while jogging and then redeems those items for money. All funds are donated to AHA.

“We are really proud of Joe, both as a veteran and citizen of the world,” said Wes Reel, manager of staffing
for WM and also a veteran. “We share his passion for keeping our communities beautiful.”

WM first learned about Sullivan from WM National Accounts Manager Kristin Marino, who brought the
campaign to the company’s attention. In 2013, Sullivan set an ambitious goal to raise $1,000 by Veterans Day.
Hearing about this, Waste  Management donated the $1,000 and is currently building a relationship that will
help Sullivan to educate the community about heart health and recycling. In total, Sullivan has collected more
than 3,700 recyclables, while contributions to his campaign have exceeded $1,500.

“The support I have received from WM has made my running project a reality and has been a huge driving
force that kept me running, collecting and raising money for the American Heart Association,” Sullivan said.