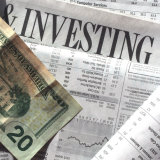 View from the Street

Different takes. When looking at the company’s fourth quarter financial results announced last
week, there were really two stories Wall Street read into. On one hand, we saw a net loss of $605
million and missed the Street’s consensus by $0.04. On the other, despite the loss — due mainly
to impairments and accruals (more on that in a minute) — the company’s core business performed
very well. In fact, it performed better than it had throughout 2013!

Part of my job in investor relations is relaying, and in some ways interpreting, our results to our
shareholders. After much experience, I can tell you that these outcomes are the most difficult to talk
about, since the simple truth is that our Q4 was much better than what you might initially read into.
Some investors got that message and were encouraged. Others responded with a kind of “wait and see”
mentality. In either case, our stock dropped some after the announcement, but stayed above $40 a
share — higher than at any time during the prior year.

So, what caused the net loss? As stated earlier, the miss was driven by impairments and accruals, or
planned future expenses. Sometimes accruals can work in a company’s favor and sometimes they don’t.
For example, Waste Management rarely has a negative accrual due to safety – after all, we’re leading
the industry in that regard. However, in the fourth quarter, it went against us due to a few large claims.

The rest of the accruals were related to compensation, which I strongly doubt we want to reverse course,
given the amount of work and effort our employees deliver every single day to their jobs. Without those
two accruals, the company would have seen a net income of $263 million for the fourth quarter, driven
by solid performances in our collection and disposal lines of business, as well as improved results on yield,
cost controls and capital spending. For the full-year, Waste Management met its financial targets and
presented a good outlook for 2014.

Investors — as is normally the case — reacted differently to our earnings. However, I’d like to share what
one of our top five shareholders had to say following the release. In a note to Waste Management (and I’m
paraphrasing), he congratulated us for our 2013 performance, and wrote how pleased he was to see our efforts
on improving yield and cost discipline beginning to bear fruit.

“What WM achieved in a relatively short period of time is impressive,” he said, and I think that overall captures
my thoughts, as well as the thoughts of WM’s senior leadership.

So, there were two sides to our earnings performance: one where we had a loss and the other where we saw a
great return on the year and are positioned to really take the bull by the horns in 2014. My personal, honest opinion
is that no matter how any investor interprets our results, the future is filled with opportunity. Let’s stay the course,
since the future is ultimately where we’ll make a difference.