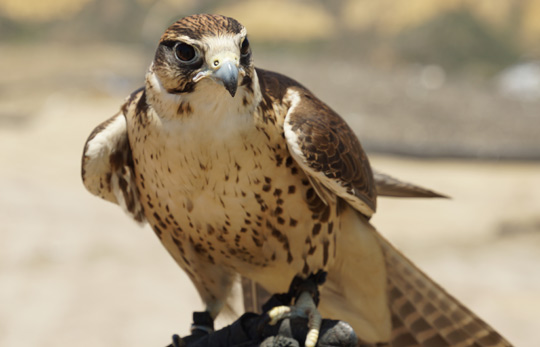 When animal trainer Joe Suffredini releases his trained falcons into the air over Waste Management's Simi Valley landfill, the sea gulls who persistently scavenge the site for food choose flight over fight, escaping to locations away from the landfill while the falcons temporarily take over the space over the gulls' feeding grounds. This routine, carried out two or three days every week, helps keep the landfill free of the feathery pests. When allowed to go unchecked, the scavenger gulls can interfere with the work of bulldozer operators, and roost on nearby buildings and near water supplies, their droppings and the small refuse they carry from the landfill becoming a problem for surrounding neighborhoods.

Though falcons have long been used as deterrents against gulls and other "nuisance" birds at airports, finding a solution to effectively scare off scavenger birds has been a problem for landfills across the country for years. "We've tried every technique available," said Scott Tignac, district manager of the Simi Valley landfill. "We even put up kites and balloons that looks like their predators. That worked for about an hour." 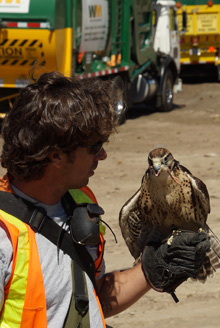 Fortunately for Simi Valley, the solution came to them. While making a drop-off at the landfill one day, Suffredini saw first-hand the futile attempts they were making to scare the gulls away. Fascinated with birds since childhood, Suffredini is an animal trainer who owns Avian Entertainment, which performs educational shows and provides trained birds for television productions. He decided to present his falcons as a better alternative for deterring the gulls. Landfill management gave the falcons a try.

"My falcons are trained to just intimidate and chase the gulls away, but not hurt them," Suffredini said. He uses captive bred Lanner and Saker falcons, which originated in Africa and the Middle East and are known for their hardiness. Federal conservation laws ban the use of domestic falcons.

"Falconry has proved to be an effective, environmentally sound way to chase the gulls away. We're using nature to control nature," said Tignac. The falcons have been employed at the Simi Valley landfill since 2000.

Waste Management's landfills and facilities provide more than 26,000 acres of protected habitat for wildlife. The Simi Valley landfill is one of 103 certified sites by the Wildlife Habitat Council. 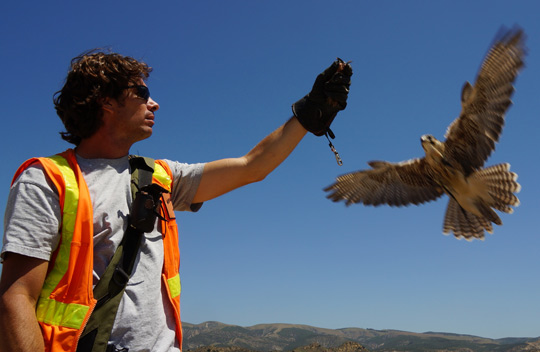