The Early Days of the Antelope Valley 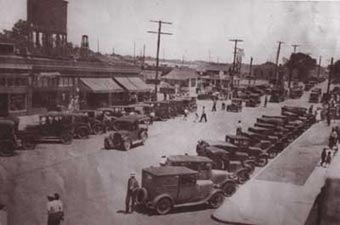 The Antelope Valley’s early history is unlike that of other regions of California. Although the Valley had no mission settlements, it served as a crossroads for Franciscan padres and explorers, as well as migrating Indian tribes, famous American pathfinders and pioneers. Even in the new millennium, this expansive region is a veritable frontier for those seeking new lifestyles.

Early Indians
Archeologists say that the Antelope Valley was once part of a vast coastal plain, and during movements of the earth’s crust thousands of years ago the area — forty miles by sixty miles — was dropped or depressed about a hundred feet below the surface of the ground creating the surrounding mountains and foothills. First known inhabitants of the Antelope Valley were Shoshonean-speaking Indians known as the Kitanamuks, who primarily lived in the Tehachapi Mountains and wandered into the arid Valley lowlands in cooler seasons of the year. They traveled in small bands hunting small game and gathering nuts. The largest Indian camp sites that archaeologists have found are concentrated near springs in the foothills of the Littlerock area to the south, in the Lovejoy Springs area to the east and in the Willow Springs area to the north. Isolated by California’s rugged terrain, the inhabitants enjoyed a comparatively peaceful life, living in crude shelters constructed of willow poles and grass. It is known that the coastal Chumashs and southern desert Yokuts established a trading with eastern Mojaves and Chemehevis throughout the Valley.

Spanish Exploration
In 1772 Captain Pedro Fages, a Spanish soldier in pursuit of deserting sailors, crossed the southern part of the Antelope Valley into Leona Valley. No records show whether he found any of the deserters, but his diary records that the soldiers saw Indians lurking in trees which they thought were date palms — actually they were Joshua Trees. These trees grow in only two areas of the world — Israel and California desert.

The opening of California to overland travel through the forbearing desert was due to Captain Juan Bautista de Anza and Father Francisco Garces, a most remarkable Spanish padre. They led a colonizing expedition including 136 settlers across the Mojave Desert from Mexico to Monterey in 1773. Later in 1776 while exploring the Valley, Garces with several Indian guides from the San Gabriel Mission recorded viewing the vast expanse of what was the El Tejon Rancheria (the Badger Ranch) of the Cuabajoy Indians.

Explorers and Settlers
After the Shoshone Indians left the valley, immigrants from Spain and Mexico established large cattle ranches there. Then, in the late 1880s, the ranches were broken up into smaller homesteads by farmers from Germany, France and the state of Nebraska.

In the 1800s, before the railroads came, Tehachapi’s first settlers were farmers who owned large tracts of land. The soil, composed of decomposed granite and vegetable silt, made farming more productive. The first settlers chose the Elizabeth Lake region and the foothills of the Tehachapi Mountains for their homes.

Famed mountain man Jededia Strong Smith was the first American to explore the Antelope Valley. His expedition to find a non-existent river from Salt Lake to the ocean crossed the Valley in 1827 when he was reportedly awed by the flat desert and its many contradictions. The valley, he described, held everything from alkali flats to tule grass marshes to broad fertile fields growing with wildflowers.

Jedediah Smith and Joseph Walker, credited with developing the north-south transportation route along the East Side of the Sierras, passed through the Ridgecrest area between 1825 and 1835. Later, the first Euro-Americans arrived in the Indian Wells Valley in 1849 when Manley and Jay Hawker discovered water there. 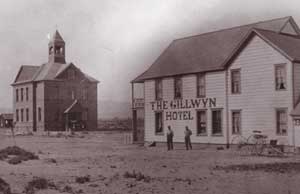 Kit Carson and General John C. Fremont came through the Valley in 1834 staying long enough to establish what is known as Fort Tejon Road. Wildlife was so plentiful that three geese were killed with one rifle shot at Elizabeth Lake. Grass and desert growth was luxuriant, and pools of water stood in places on the Valley floor.

Serrano Indians originally inhabited the Wrightwood area. Later, settlers came in and established a cattle ranch. The ranch evolved into an apple-producing business, then into the resort that it is today.

In the winter of 1849-50 a group of pioneers seeking the gold fields took the Old Spanish Trail that went around the south end of the Sierras. The pioneers lost their way and traveled across the harsh Mojave Desert plateau until they found a way through a pass near Palmdale. They were finally rescued by cowboys from Rancho San Fernando near Newhall.

The area became known as the Antelope Valley because of the immense herds of antelope. Approximately 60,000 antelopes roamed the Antelope Valley until the herds were decimated by severe winters in the late 1800s and by hunters who slaughtered thousands of the fleet-footed animals.

In 1860, Dr. Darwin French’s party discovered silver in the Coso Mountains, in the northern China Lake Complex. Soon, additional silver discoveries were made in the Slate Ranges. Not long after that, the nearby mountains teemed with miners.

By 1873, mining discoveries in the Panamints, northeast of China Lake, prompted the creation of a mining center near Copper City. The roads built by that area’s silver miners facilitated the growth of the borax mining industry.

Ranching soon replaced mining as Ridgecrest’s major industry. That was the main source of income in the community until the beginning of World War Two. In 1943, the Naval Ordinance Test Station (NOTS) was established at its first headquarters at InyoKern Airport. After the establishment of NOTS, Ridgecrest became a boomtown.

Railroad Growth
The building of a railroad sparked the most growth in the Antelope Valley. About 1867, Southern Pacific established a route through the AV, with a stop-off in Lancaster. Trade with the outside world could take place now, so settlers started to trickle into the area. At first, they set up homesteads close to the rail center, then later moved farther into outlying areas. In 1874 the Western Hotel, the oldest building in the Valley, was built, and it is now a historical museum in Lancaster. By 1898 Lancaster and the Valley were so prosperous that more settlers and land seekers moved into the eastern area with the intention of raising grain and fruit.

Palmdale was not always called by its present name. Originally, in 1886, a group of German and Swiss settlers from Nebraska and Illinois named it "Palmenthal." The old town was situated near what is now 27th Street East and R-8. Those early pioneers chose that location because it was near the Southern Pacific Railroad. In 1899, they moved closer to the tracks and resettled in an area that is now Eighth Street East and Highway 138.

Mining
Besides the establishment of the railroad, mining played a major role in the history of the Valley. Gold was first discovered in 1876 in Acton, but it was the discovery of gold at Tropico Hill in Rosamond by Ezra Hamilton, and Charles Graves, the Valley’s first African American postmaster, that started serious mining. Miners working the Rosamond gold mines used to sail across Muroc Dry Lake, going to and from work, on a "V" shaped wagon rigged with sails.

In 1898 borax was found in the surrounding mountains. The gold mining boom lasted until the beginning of World War II. At that time, gold ore deposits ran out and prices fell. However, borax mining continues to this day at the world’s largest borax mine in Boron.

Palmdale’s main industry in the 1880s was farming. Then, between 1905 and 1913, the Los Angeles-Inyo Aqueduct was built. By 1921, the opening of Sierra Highway meant improved travel to and from Los Angeles, and a greater flow of commerce into the Antelope Valley.

In the late 20’s and early 30’s, when the Great Depression came, farming and business, in general, suffered. With the beginning of World War II, jobs and prosperity returned to the Antelope Valley.

Schools
The settlers valued education. They built Palmdale’s one-room school house in 1888, and it survives today, having been moved to McAdam Park on 30th Street East.

Aerospace Valley
In the 1930s the airplane came to the Antelope Valley. The Air Force started testing operations at Muroc Dry Lake, now Edwards Air Force Base. During World War II many peoples arrived to work at Muroc Air Field and the Marine Auxiliary Training Base in Mojave (now called Mojave Airport). Some of those defense workers stayed on in the Valley and raised families. Many of their children became the current labor pool for aviation/aerospace industry. They built the airplanes and spacecraft that made the AV famous. Their children carry on the tradition by building the space ships of the future.

Today, the Antelope Valley is a major suburban area and home to a rich and diverse base of industry, most notably some of the nation’s biggest aerospace companies. It continues to be one of the fastest-growing areas of Southern California, and all signs point to continued growth and prosperity.