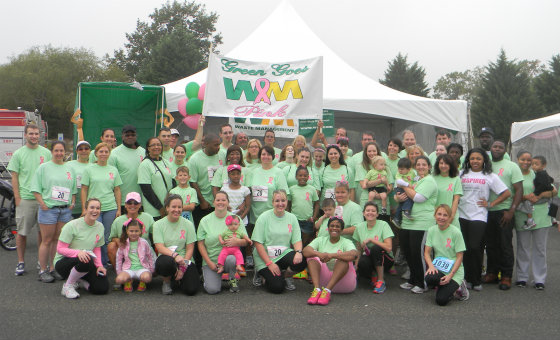 The team attracted nearly 100 participants and supporters and far surpassed the $7,714 it raised for the
2012 event.

“Thank you to everyone for a very successful Race for the Cure,” said co-captain Alyssa Ruggiero.
“This was a complete team effort, from those who participate in the walk, to those who have been wearing
pink every Wednesday in support and awareness of breast cancer, to everyone who baked or purchased baked
goods during our bake sales, and those who donated to our team—we couldn’t have done it without all of you.”

“I think everyone who attended the event would agree that despite the overcast and damp day, Race for the Cure
is not only a fun event, but inspirational,” Diane said. “It is also fun to interact with our customers who come by
our tent and are excited by our involvement in Race for the Cure.”

Alyssa, Diane, Kim, Beth and Dee said the battle against breast cancer is a 24/7/365 effort and said they have
available information about the disease.

“The work doesn’t stop just because the race is over,” Kim said. “October is National Breast Cancer Awareness
Month.  This is the perfect time to start a new routine of doing monthly breast self-exams, schedule your yearly
mammogram, and remind your wife, your sister, or your mother to get screened.”

“Even if you are healthy now, just being a woman and getting older puts you at risk for breast cancer,” Beth said.
“Finding breast cancer early may save your life.”