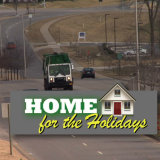 HOUSTON – To start the month of December, Waste Management released the second video installment of a
new safety campaign called Home for the Holidays. The objective is simple: make certain that each and every
employees is home safe with his or her family this holiday season.

Hosted by Executive Vice President and Chief Operating Officer Jim Trevathan, part two focuses on the unfortunate
incident involving Driver Richard Pezina from San Antonio, Texas, who died on December 31, 2012 after his vehicle
rolled over on a highway. The video interviews managers and coworkers, who describe Pezina’s personality and how
his passing has personally affected them.

“It’s one of your family,” said Chuck Haraf, area safety manager. “Garbage truck drivers are close-knit. Nobody comes
to work expecting something like that to happen.”

DVDs of this second installment were distributed to sites at the beginning of the month. Office employees can view the
episode by visiting the homepage on Visor. “Home for the Holidays is a call to action,” said Trevathan. “It’s a challenge
to be 100 percent focused 100 percent of the time when it comes to safety.”

Click here to view Home for the Holidays posters.